The Eheads – Marcus Adoro, Ely Buendia, Raimund Marasigan, Buddy Zabala – played a total of 28.5 songs spread in 4 sets and in 3 long hours last night (March 7, 2009) at the SM Mall (MOA) of Asia Concert Grounds!   That’s the longest concert held by a single band that I’ve ever attended.  I believe it’s more that just 3 hours. The concert last night was just the final set. The first set (Eraserheads: The Reunion) was on August 30, 2008. I was there too. So technically, the concert lasted for 7 months and 7 days. That long! 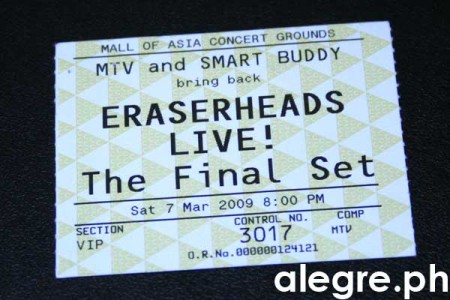 Here are the songs…

Set 2 //This acoustic set is the most memorable one for me. They played songs that I’ve never imagined them perform in a concert. Not to mention, I’ve never seen them on an acoustic setup.

Set 3 //This is supposedly their final set

Set 4 //Some of the people started leaving. But, it seemed like Raims wasn’t contented with the 3 sets. He wanted more. And so did we! He called everyone and even asked the crown to call out the other band members! Ely! Marcus! Buddy!

And that was the greatest concert EVER!